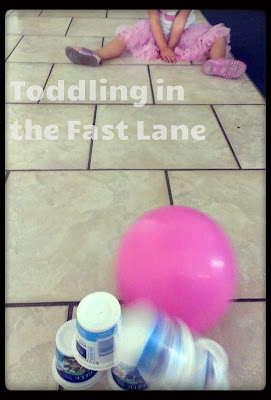 I was looking for an active play idea that didn't require me to be that active (I am not very good at tag at 36 weeks pregnant).  We hadn't tried bowling since Chiquita's 2nd Birthday party and now I know it will be part of our regular play routine.

I was actually inspired by finding a stack of used yogurt cups that I'd been saving for "something".  I've seen bowling with various empty plastic containers on other blogs and it was serendipity.  I got six and stacked them like a pyramid.  We found Chiquita's favorite *pink* ball and we were ready to play!

Chiquita tried knocking them over with soccer kicks, bouncing and rolling.  Rolling was by far the most accurate, but no matter what it produced lots of running, laughing and fun. 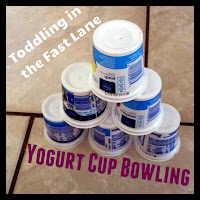 After a while she decided it was my turn.  Not part of my original plan, but turned out to be a great idea.  She had no idea how to stack the cups in the pyramid like I had, so we got a chance to practice new vocab in Spanish "sobre ambos" (on top of both of them) as I tried to give verbal instructions on how to stack.  Each time she got better, and now she doesn't need any help.  New construction skill!

We played for at least a half hour the first time and started a second game later that night.  I was able to sit and chill, just re-stacking the cups so it was great for me.  She might even be able to play independently with a friend.