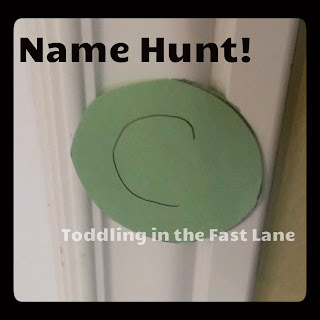 Chiquita had such a fun time with the Pumpkin Treasure Hunt that I wanted to try coming up with new variations to play the rest of the year.  Obviously we could (and will!) do any shapes with numbers on them, but since we've learned so many letters I thought we'd revisit name recognition.

I just took the letters to Chiquita's name from the Alphabet Munching Monster game (there's still plenty of other letters to play with!) and drew outlines of the circles on a piece of paper with each letter in the middle, all capital letters, since that's what's on the circles from the game.  I'm not worried about introducing lower case letters yet, we're just getting started!

Then I taped the letters at Chiquita-height around the house and waited for her to find them.  She is much faster with pumpkin practice under her belt.  I'm going to actually start having to hide them.  She likes hiding almost as much as seeking which lt us play a little longer.
Posted by yogamama