Columbus Day has long been an iffy holiday for me.  I've known since 3rd grade that he didn't discover the "new" world.  However as an adult learning about the slavery and cruelty he, in particular, initiated among natives that lasted centuries in one form or another finished this holiday for me.

The Oatmeal ran a great editorial cartoon ending with the suggestion of celebrating Bartolomé de Las  Casas, a Spaniard that started out like his peers with slaves and a plantation, but rejected the violence and inhumanity that came with privilege to become a priest and fight for native rights.

I didn't know how to share this story with my three year old in a meaningful way.  So, with a suggestion from my friends at Multicultural Kids Blogs, I decided that today could be a day to learn native crafts and stories from the Americas.  Certainly not the only day, but a set-aside day. 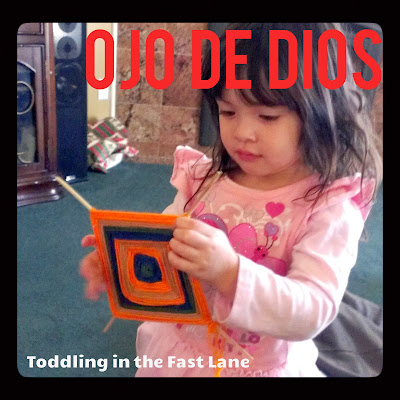 I decided to start with making a God's Eye (Ojo de Dios).  These were made by Pueblo people and Bolivians, apparently spanning the continent (more evidence of the amazing pre-columbian civilizations).  They have slightly different explainations and traditions throughout the Americas, but seem to always be a thoughtful symbol representing divinity and protecting those around it.  I made these as a kid but never knew their history.  The irony that they are commonly known by their Spanish name is not lost on me.

I let Chiquita pick which color yarn to use and tried to get her involved in the weaving.  If you haven't made these before, here's a great tutorial.  It wasn't easy for her and she contributed only a few rounds to the finished project, but she did pick every color change and we talked about what the colors traditionally represented (red represented life, yellow = the sun, blue = sky and water, green = plants, brown = dirt) and why it was called an God's Eyes (people would think about God while making them and the God's Eyes would watch over and protect them).

It won't be our last discussion, but it's a start.  I want to give Chiquita truth and while there's some truth I might not be 100% sure how to share, I'm going to avoid teaching her the untrue traditions.
Posted by yogamama

Email ThisBlogThis!Share to TwitterShare to FacebookShare to Pinterest
Labels: Crafts to do Together, Hispanic Heritage, Native American