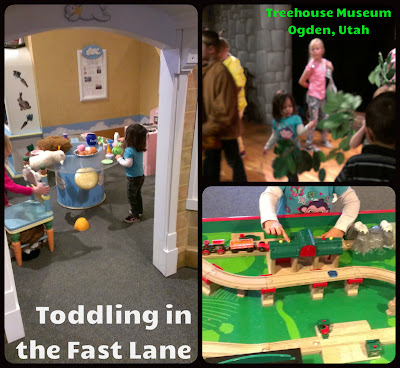 We haven't been anywhere new for a long time so our visit to Ogden, Utah's Treehouse was a real treat. I couldn't believe how much there really was to do here. Chiquita spent around 4 very happy hours here.

Most of the museum is divided up in little self contained play spaces.  I would guess the museum has at least 20 separate play spaces. For example, Chiquita's favorite: a English cottage with a kitchen for tea, peter rabbit decor, a book nook and a display case with antique stuffed animals, dolls and other English memorabilia.

A few of the play spaces: a garden, a music section, a Mongolian yurt, a rodeo with horse to ride, an art garden, a puppet theater, a castle with a stage, a doctor's office, Lego tables, drawing corners, of course the treehouse that the museum is named for, and the list goes on!  She could have easily spent an hour playing in any one of the playspaces.  They were all rich with dress up clothes, free play toys, display cases.  A child literally could not come here and not be drawn into play somewhere.

Besides free play for ages the museum had another really cool component, their theater.  We went to one, but there were three interactive stories/plays offered during the time we were there.  It is probably best for the 5 to 12 crowd since it was about a half hour from start to finish, but Chiquita still really enjoyed it.

There was a narrator from the museum and a few helpers.  They had costumes laid out and went through the story a little first then picked kids from the audience to help act it out.  As the narrator went through the story he would pause to let the kids repeat their "lines" and act out what he'd said they did.  It was great! The story they acted out when we went was Mufaro's Beautiful Daughters (Crafty Moms did a great post on this book, so I knew it!). Even with some run-away trees (like I said, the younger crowd had a little trouble staying with it the whole time) it was really a great performance and a lot of fun.  Chiquita didn't get picked for any of the roles (which I felt was for the best) but after the play she did go on stage to be a tree for a bit.

If we lived closer this would become a regular haunt.  For any of you who may live in the area, be stopping in or driving thru, I would put this on your to-do list.
Posted by yogamama

Email ThisBlogThis!Share to TwitterShare to FacebookShare to Pinterest
Labels: Places to go, Places to play