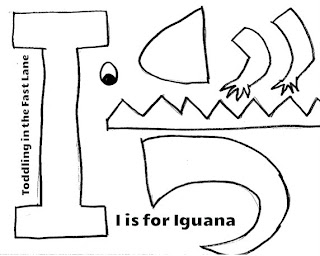 Chiquita colored this I es de Iguana coloring page from primeraescuela.com while I prepped for the I is for Iguana craft.  I was pleasantly surprised that she really got into coloring because lately she's just scribbled once or twice and been done, but this time she really colored the whole page and even pointed out the letter I to me.

I drew a capital I for the body of the iguana, a tail, two feet, a face and ridges on green construction paper. You can free hand it like me or I did draw up a template for you.  When I first started doing crafts with Chiquita I didn't have much confidence in my artistic skills so I liked templates.  I still can't draw worth beans, but I've found it doesn't matter nearly as much as I thought it did. 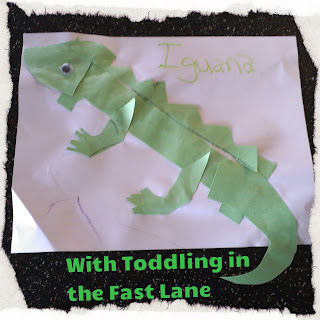 I cut everything out and made sure it looked something like an iguana.  Then with Chiquita I took it apart, showed her the letter I and reassembled the iguana.  I always do this with these crafts to make sure she sees the letter we're working on and sees how the shapes make the animal.  She called it a "lagartija", lizard in Spanish (I was so happy she remembered that word!) and I told her that yes, it was a special kind of lagartija, called an iguana.

Then we took it apart again and I put down glue guides for her to "build" the iguana.  She doesn't like getting glue on her hands so I had to reassure her it was ok, and have wipes on hand so she could put the pieces right on the glue.

She's always a little sad to have to leave crafts

to dry so as I wrote "Iguana" up top she did a little coloring in the corner before we put this guy up to dry.
Posted by yogamama

Email ThisBlogThis!Share to TwitterShare to FacebookShare to Pinterest
Labels: Alphabet, Crafts to do Together, Featured, Iguana