After a long break I got back together the Spanish for Preschoolers play group today! Chiquita is always very excited to have friends come and play!

We spent some time introducing ourselves, learning to say "Me llamo..." and "Como estas?"  Our main activity focused on "movement" words like salta (jump), corre (run) and gira (spin). 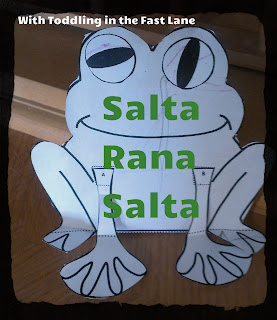 First I talk salta having all the kids jump with me while saying the word.  Then we read "Salta Ranita Salta".  The book is about a frog who's adventures are constantly requiring him to jump.  Every other page has the phrase, "Salta, ranita, salta!"  It was fun because I could get the children to say it with me and have some interaction.  I also had to explain the phenomenon of frog hunting to some of the kids that didn't understand why the kids in the book would catch a frog.  In some parts of the world, I told them, they eat frogs!

Then I taught the kids the action words corre and gira.  We practice by acting them out as we listened to "Josefina la Gallina", from Spanish Playground that I featured on Say It Two Ways Thursdays a few weeks ago.  Chiquita LOVES this song.  She loves running around like crazy and it was really fun.

Then we settled in to cut and color a fun frog craft from firstschool.com

Email ThisBlogThis!Share to TwitterShare to FacebookShare to Pinterest
Labels: Spanish for Preschoolers