I feel lucky that Spanish is such a big minority language where I live that I'm able to get quite a few television shows in Spanish.  Since Chiquita started watching TV I've recorded the weekly Dora, Diego, Backyardigans and Pocoyo that come on our local Spanish language station once a week.  I even found that a few other channels had Spanish-language alternatives if I just changed the audio language setting on my remote (Baby First is a great one available in lots of languages, online too!).

I never expected to let her watch much television at this age, but when we watch programs in Spanish I never feel guilty.  I know some families that only watch television/movies in their minority language, we're not that good (she LOVES Wonder Pets).  How do you feel about screen time in your minority language?

A couple of our most popular links from last week were about language learning media:

Kid World Citizen shared a new program with Elmo in Chinese.  Sesame Street has, in my opinion, always been a leader in global awareness and languages.  I learned some of my first Spanish on Sesame Street. 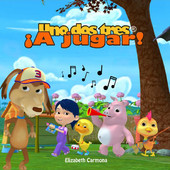 We love YouTube as another source for great minority language kids videos.  Spanish Playground shared a fun song and video in Spanish that gets kids up and moving.  Chiquita and I listened to the song and did the movements until I got too dizzy to spin anymore.  It was really fun.

If you were featured don't forget to grab a featured button (in the sidebar)!