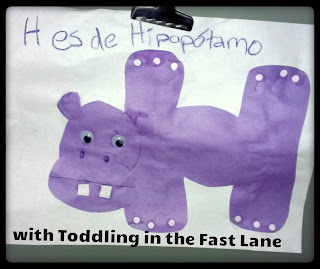 I'm losing steam a little with our bilingual alphabet so it's good to get back on track. I'll be honest though that we may only do one craft per letter from here on out.

I put on this cute song/video to start us off. I'm pretty sure the target audience was Spanish speaking kids but the way they break down this long word would be good for language learners of any age.

I'd prepped a hippo craft by cutting out a big bubble letter H for the body and all the pieces for the face. I used hole punches for the toe nails, which were a little small but a great way for Chiquita to work on fine motor skills.

We looked at the letter H first and talked about how hipopótamo starts with H (pronounced ah-che in Spanish). Then, one by one, I put glue guides on for each piece and Chiquita put them in place. Like I mentioned the toenails in particular were tricky since they were so little, a good skill builder.

I love how much Chiquita loves these crafts.  She gave her hippo a hug when we were done!

I'm going to try something I've never done.  Here's the hand-drawn template I used for this craft.  Don't laugh!  ...but do feel free to use it or draw your own.  You can add toenails with hole punches like us or slightly bigger half circles.  Also feel free to use google-eyes like we did instead of the eyes I drew. 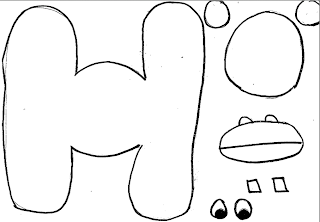 Email ThisBlogThis!Share to TwitterShare to FacebookShare to Pinterest
Labels: Alphabet, Crafts to do Together, Hippo