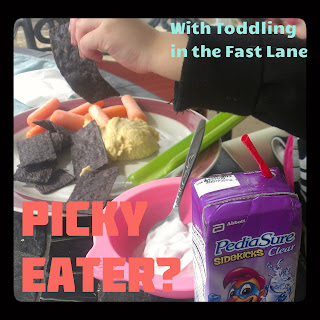 I've mentioned before that Chiquita has become a picky eater. She didn't start out that way at 6 to 12 months when she first started eating, but over this last year it has gotten steadily worse.  Papi has always worried about her eating enough and I kind of blew it off, but when I realized that she had lost a pound in the last 6 months and she wasn't willingly eating any kind of protein I knew we had to do something.

I am a grazer.  Left to my own devices I eat all day but rarely have an actual meal.  I was leading Chiquita down the same path, and what was probably worse I would ask her what she wanted to eat and just give her what she agreed to.  These two things spiraled into where we are now where she eats some fruit, veggies and chips throughout the day but nothing substantial.

Today we went to see a dietician.  I think my husband expected to go and get a prescription for an appetite increaser.  Instead we sat down with the dietician to make a life-style changing meal plan.  Here's the plan:

1. Have 5 "meal" times a day, including snacks.  They don't have to be strictly at the same time but they do need to be around 2 hours apart with no food and drink in between, even if she didn't eat at meal time, so Chiquita has a chance to get hungry.

2. Offer milk or other high calorie/nutrient drink with each meal instead of water or juice.  Chiquita has never been a milk drinker so the focus isn't going to necessarily be on her drinking all of it but more getting her to try it.  We'll probably try some "side kicks" juices since she does drink boxed juice well.

3. Have meals at the dining table and don't do other things there so she gets used to thinking of it as the place to eat.  We will have to make sure crafts are done other places so she doesn't get confused with food and crafts :)

4. Give her the same meals as everyone else, including but not limited to her favorite foods.  She has to learn that she needs to eat the food that she's given not only the food she wants to eat.  The dietician said that even if she doesn't eat the foods she doesn't like at first it's therapeutic for her to touch them and smell them.  I admit that this will be a little hard for me in that I hate seeing food wasted.  I know that my attitude of "why give it to her if she's not going to eat it?" has contributed to her picky eating.

5. Have her sit at the table for a set amount of time, even if she doesn't eat.  Just establishing meal routines.

I bet some of you moms out there are laughing a little either because this was how you've always done things (I know my mom is, she thinks I'm a pushover).  I know a few of you are probably struggling with the same thing.  I think this is going to be hard.  I want her to eat well, but I don't want our house to turn into a battle zone with regard to food.  I worry that even though Papi was there and agreed to it, that he will fret if she doesn't eat meals or not be able to handle tantrums.  I worry I won't be able to resist tantrums.  I want her to have a healthy attitude toward food and I want her to keep growing healthy and strong.  So I'm going to be posting every once in a while on how it's going.


**Link below is affiliated, all opinions are mine**