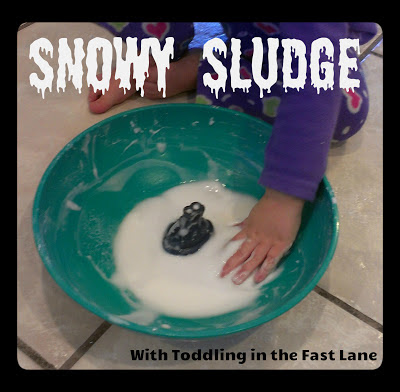 It's really called "Clean Mud" according to the post I found it on from Growing a Jeweled Rose, but since it's white I decided to tell Chiquita it was snow.  I tried to find her plastic penguin to add to the ambiance, but he's hiding so we brought out the monkey pirate from Ice Age.

I just poured a bunch of baking powder into a bowl and added water until goopy.  Chiquita helped me stir it too.  She's definitely in a "me too" phase.  We brought it to the kitchen floor and squished it in our hands.  The monkey leaped and "swam" in it.  We had some discussions about not flinging it at Mommy.


After we'd played with it for a while I thought about vinegar volcanoes and wanted to experiment... It was disappointing... I guess all that water made the reaction less powerful, or maybe I just remember it wrong.  It fizzed some and then Chiquita demanded more snow.  Oh well.

Bonus, I was able to really clean my kitchen floor with all that baking soda and the rest of the goop I poured in a jar for random future cleaning.  Anyone know if there's an expiration date on baking soda goop?

Email ThisBlogThis!Share to TwitterShare to FacebookShare to Pinterest
Labels: Crafts to do Together, Play, Recipes, Winter