We had friends over today and since Chiquita has a hard time having friends play with her toys, I decided a few crafts were on order! 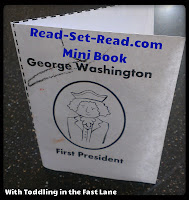 We started by coloring these cute mini books about George Washington and Abraham Lincoln from Ready-Set-Read.com.  They were super easy to assemble, just fold the "hamburger" way and then the "hotdog" way (did you guys learn folding like that) and the little book is done.

Then they played with toys for a while.  When the whining started I brought out the next craft - log cabins, just like Abraham Lincoln supposedly grew up in. I prepped a model beforehand 1. So they would know what we were trying to make. 2. To make sure my idea actually worked. 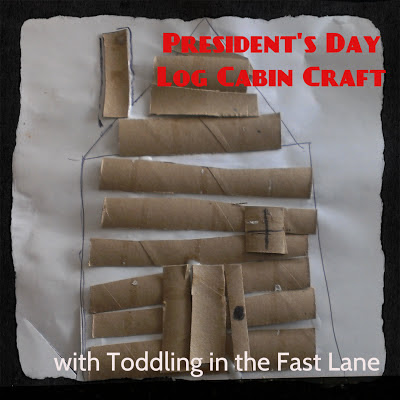 I just drew a super simple outline of a house on a piece of paper.  Then I cut up a tp roll long-ways to make the "logs".

For the model I just placed them on the paper, adding smaller pieces for the roof, chimney and laying a few together vertically for a door.   I dumped the "logs" off the model and gave it to Chiquita since she hasn't mastered scissors yet.

I helped the rest of the kids cut up logs and we all glued them down on our cabins.  Some ended up looking more cabin-y than others but everyone had a lot of fun.
Posted by yogamama

Email ThisBlogThis!Share to TwitterShare to FacebookShare to Pinterest
Labels: Crafts to do Together, Featured, Mini Book, President's Day, Recycled Crafts