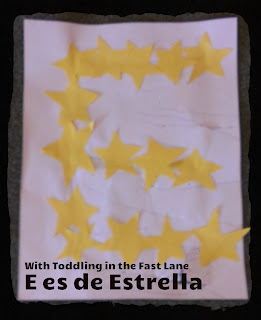 So estrella doesn't start with an E in English.  I knew I wouldn't be able to find multiple words for every letter that work in both English and Spanish.  We have a fun little craft though.

I drew a letter E and let Chiquita "pintarlo" while I cut out a bunch of stars.  Since it was a pen and the paper was on carpet she ended up poking holes through the paper, which was way more fun than just coloring.

Before Chiquita could totally destroy the paper we glued the estrellas (stars) along the lines of the E.