Chiquita loves cocodrilos, though maybe not like you would expect. Once when we were at a Chinese buffet we gave her garlic green beans and she declared they were "cocodrilos" - crocodiles!

So we started our Cocodrilo letter C activity with our quick version of chinese-style garlic green beans.  We start with a handfull of fresh green beans and season them with a dash of salt, pepper, garlic powder and kiwicha powder.  We add the kiwicha powder to everything now that Chiquita has decided she's vegetarian and we worry about her getting enough protein.  Then we microwave it with a little butter either covered or in a sandwich bag, for a minute or so.  She LOVES them.

Last night we started making our crocodile by painting the top side of an egg carton green and the inside red for the mouth.  I took two egg "bottoms" and painted them white for eyes, making the sharpie pupils when they dried.  I also cut out a bunch of letter Cs from a cardboad box. 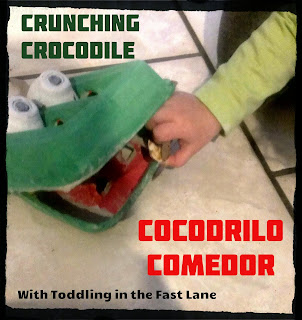 This morning everything was dry and I attached the jaws (just with staples) and Chiquita fed the Cocodrilo letter Cs.

Later in the day she asked for the "crocodile song".  I have a habit of making up songs for her and then forgetting them so this time I recorded it on my phone - good idea since she asked me to repeat it 20 times!!  I will try to remember this in the future to avoid sadness like the "Hello Kitty Ballerina" song incident :).

Email ThisBlogThis!Share to TwitterShare to FacebookShare to Pinterest
Labels: Alphabet, Crafts to do Together, Recipes, Recycled Crafts