C is for Crab (or Cangrejo) 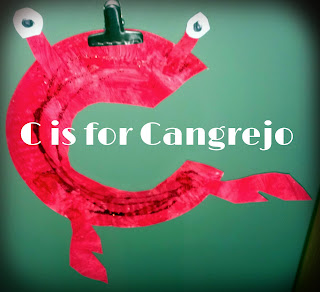 It's C Week! I'm officially making it a goal to introduce words that start with the same letter in Spanish and English. I still have the cangrejo we made a while back hanging up so it was a natural choice.

We painted a paper plate red, I say we because as always Chiquita gets bored before the plate gets covered.

After it dried I cut out the center and a chunk of the side to make a C. With the cut out I made eyes and claws. Chiquita glued it on and then we added glitter!

Email ThisBlogThis!Share to TwitterShare to FacebookShare to Pinterest
Labels: Alphabet, Crafts to do Together