We are learning the letter A in Espanol this week and we started with abeja (bee).  We got a cute printable from www.primeraescuela.com.  Chiquita sort of traced the letters.  She's only two and a half so I'm not worried about her learning to write the letters yet, just introducing the idea. 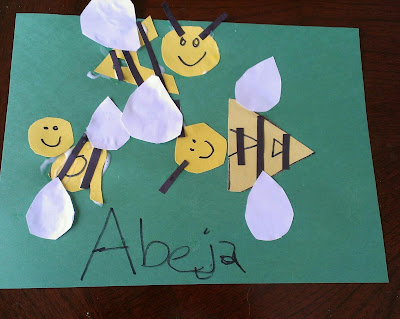 We'd made a bee before and it was a big hit so I knew she'd like a bee craft.  This time we made our "abejas" out of the letter A.  I drew a big A and a little a in block letters on a piece of yellow construction paper.  I cut those out and little black strips for the strips.  While she was gluing the big A down and putting on it's strips I cut out circles and drew faces on them and white wings.

I tried drawing glue "hints" as to the best places to put each piece but Chiquita still needed a little help getting the stripes straight.  I tried not to interfere too much, just enough that they look like bees.

After we had a big A abeja and a little a abeja, Chiquita decided they were a mommy and baby abeja and they missed their daddy so we had to make a third one :)

I wrote Abeja on the bottom and pointed out to Chiquita that Abeja had both a big A and a little a!

Email ThisBlogThis!Share to TwitterShare to FacebookShare to Pinterest
Labels: Alphabet, Crafts for Grownups, Spanish for Preschoolers