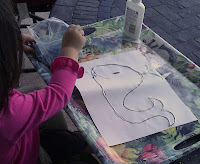 We've had left over Rainbow Rice in the cupboard for like 5 months so today we finally decided to use some for a new activity!

It's the same idea as glitter and probably messier but still lots of fun.  First I drew Chiquita some pictures.  Since our rice was blue I made ocean animals (Chiquita doesn't mind if I don't draw well so hopefully neither do you). 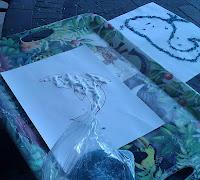 Then Chiquita added glue - well the first time I helped a lot so that it outlined the drawing, the second time I helped a little so it wasn't just in one spot and then I just let her have at it for the last two. 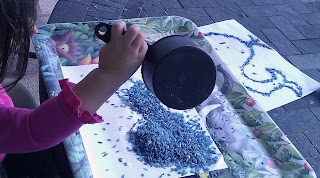 Next it was time to add the rice.  I thought she would be fine just grabbing the rice and putting it on the glue.  Not so silly Mommy!  Her fingers got glue all over them and she'd only added like 3 grains of rice.  Plan B!  I got a measuring cup and put the rice in there so she could just dump it on the picture.  Then we shook the picture around and dumped off the extra rice. 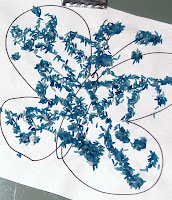 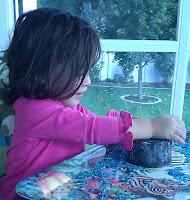 She was very happy with the results.  It was a short activity, even with 4 drawings it only took a couple minutes.  Chiquita spent a little time playing with the rest of the rice before we tried to clean up.

Email ThisBlogThis!Share to TwitterShare to FacebookShare to Pinterest
Labels: Crafts to do Together, Recycled Crafts