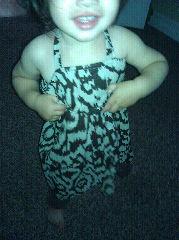 I am so proud of myself!  I just made Chiquita an entire outfit for the very first time!  Both the leggings and the sundress are made from old shirts of mine.  I used this tutorial from Make It and Love It to make the leggings and roughly based the dress on this tutorial from Prudent Baby. As you can see I did a halter style tie instead of buttons (it had to be simple!).
The leggings were so easy because basically you just trace a pair of leggings they have, cut and sew.  I did make one more cheat then the tutorial, I cut it from an old shirt and had the bottom of the leggings at the bottom of the shirt so there was already a hem and I could skip that step.  Also I don't have double needles (and didn't want to figure them out).  My first attempt at leggings sewing with a straight stitch was almost disasterous (kept ripping out around the waist) so I learned my lesson and did a slight zigzag stitch on these and that worked lovely. 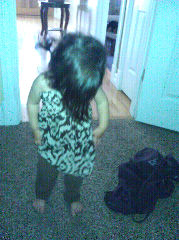 The dress is great because it's just rectangles so I didn't need a pattern, just a tape measure.  And they weren't real even rectangles and it still worked out.  I made both a little big with the expectation that they'll fit her all summer.
The best part was it took me about 2 hours total (two naptimes)!!  And the only thing bought was elastic. That means maybe I'll do it again.

Email ThisBlogThis!Share to TwitterShare to FacebookShare to Pinterest
Labels: Crafts for Grownups