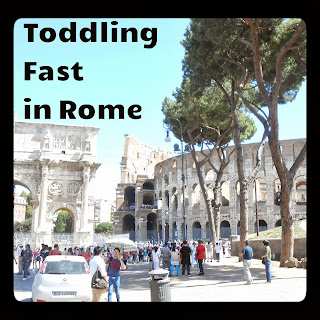 First of all, I am greatly in debt to Rome City Guide for Kids.  This blog had great info and most important a list of playgrounds.  Playgrounds are apparently new to Rome and no one knew where they were.  Even with her list we had trouble finding them (the staff at Castel Sant’Angelo didn't know there was a playground around back) 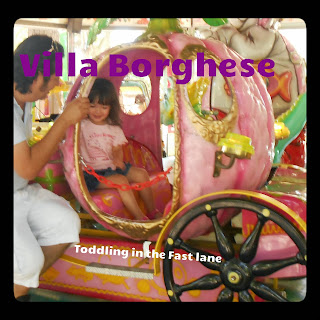 1. Villa Borghese - this mega park was wonderful!  There was a metro stop right to the front gates, a bus stop by the back entrance, and buses around the park, though we opted for strolling.  There was a section with merry-go-rounds and other games.  Plenty of gelato vendors and a cute zoo.  It was a LOT of walking so in retrospect we would have caught a bus within the park once or twice.  The zoo is much more intimate than a US zoo, with the animals much closer.  This meant the mini train around the zoo was really a good way to see a lot of the animals with less walking.  The children's museum and puppet shows were closed when we went but sounded cool.

2. Castel Sant’Angelo - as I mentioned above there was a playground outside of the castle, around back from the main entrance - no entry fee required!  The angel statues along the bridge toward the main entrance were probably my favorite part (we got a tip from a local to get off the bus before the river, not farther down by the Vatican where my map suggested).  The inside was cool too (though LOTS of stairs).
The original structure was a tomb built for a Roman emperor, but several generations of popes lived in and expanded the building through the 17th century.  Then it served as a prison before being recognized as a historical and tourist site.  The views are beautiful and Chiquita loved running along the walls peaking through the "windows" (openings for artillery).  We didn't get an audio guide as Chiquita was antsy to go outside and play but there was not much written information through the structure so if you want to learn anything it wound be a good idea.  After playing at the park we walked over to St. Peter's square outside the Vatican.  I was glad we'd decided to forgo the inside tour as the line was easily 3+ hours long.  Everything I read indicated that this was better for grownups and big kids. 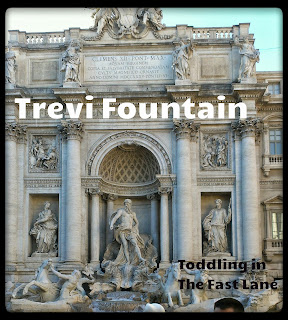 3. Trevi Fountain - I loved this fountain!  It's huge and beautiful!  The area around the fountain is fairly touristy, but we found a little eatery where the food was amazing!  Honestly the best we had in Rome.  The tiramisu was to die for!  There were roaming musicians, "centurians" waiting to take pictures with you, and Chiquita's favorite - pigeons!  It was a great place for a relaxing dinner.

Rome was a great walking city.  There were lots of fountains and statues through-out the city to look at and piazzas were fun places to hang out.  Since Chiquis is into pizza and pasta, food was really easy, though I was still expecting, as an American, to find a McDonald's with an airconditioned playground (didn't happen).  Daddy had a harder time since beef is not a common offering and he loves steak - most common meat we found was pork.
Posted by yogamama