I'm trying to come up with lessons that build on the previous week's lessons and appeal to pre-schoolers, so we met new animals today in Spanish for Preschoolers and practiced counting. 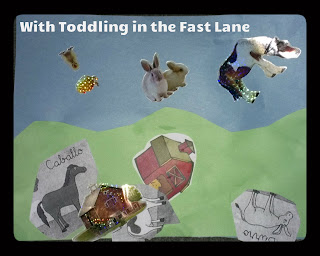 I introduced nine farm animals (print-outs taped to pipe cleaners) one at a time and let the kids hold a few each.  I found a very cute image here (a blog in Spanish apparently dedicated solely to teaching children about farm animals, tons of resources!) that I used.

Then we sang "Venga a Ver mi Granja" from Music with Sarah.  On each verse I had one child pick one of the animals they were holding for us to make the noises of.  Did you know that some animals "say" different things in Spanish?

After singing ALL nine verses (maybe a verse or so too many) we read "Cinco Patitos" (we read this once before in our birds lesson).

We finished our lesson by making little farms.  Each child got a piece of blue construction paper and a half piece of wavy green paper to make hills.  Then they could glue on a barn and as many animals as they wanted.  I had farm animal stickers too
but the only way they could get stickers was to ask for them in Spanish.  We practiced the names a few more times so each child could ask for a few stickers.

Email ThisBlogThis!Share to TwitterShare to FacebookShare to Pinterest
Labels: Crafts to do Together, Farm, Featured, Spanish for Preschoolers