People of Corn - book and craft 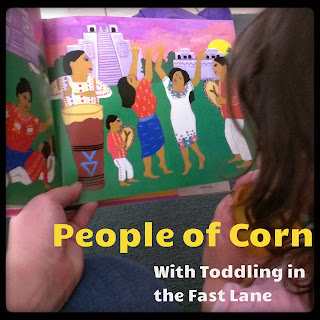 I recently had the opportunity to write a guest post about my experience with Guatemalan culture for Nomad Parents.  I hope you'll go check it out.  I really love the beautiful Mayan people I worked with.

As part of preparing for that post I bought a picture book to read with Chiquita call "People of Corn" which is a retelling of the Mayan creation myth (it sounded a lot like the Popul Vu that I read in college).  It was a longer story than we've tried before and I was proud of Chiquita for listening longer than I expected (we had a few juice and crackers breaks). 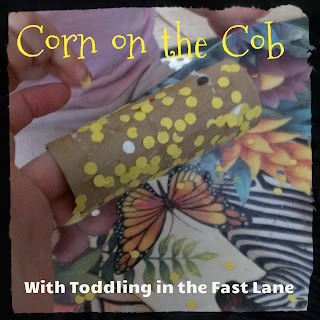 It was a lot like other creation myths in that the creators started out with darkness and light and earth and water.  Then they created animals and finally people.  The interesting part of the myth to me is that the reason the gods made people is because they wanted to be thanked for their work.  They try making puppets of wood first, but since they don't have hearts they aren't thankful.  Finally they make people from corn, the Mayans.

When the story was over we made "corn on the cob", one of Chiquita's favorite foods.  Chiquita helped me punch out yellow "kernels" (really it was a little too hard for her, she did like two and I did the rest).  We put glue all over a cardboard roll and rolled it in the kernels with some success. 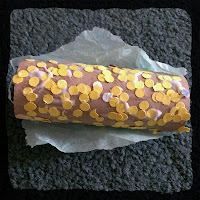 Chiquita and I added more kernels by hand, a great exercise in fine motor skills and an excellent reminder to me of Chiquita's short attention span.  I added some green tissue paper for husks and we were done!  I can't say it looked much like corn, but Chiquita remembered what it was when I asked her later and that's good enough for me.
Posted by yogamama

Email ThisBlogThis!Share to TwitterShare to FacebookShare to Pinterest
Labels: Books, Corn, Crafts to do Together, Featured, Guatemala