Have you signed up for my very first giveaway yet? 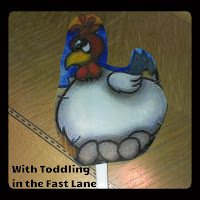 I was a little worried this counting activity might not hold everyone's attentions in this week's Spanish for Preschoolers but I was pretty happy how it turned out.

I introduced my "friend" la Gallina Turuleca (the crazy chicken) and explained that she had laid ten "huevos" but since she was "turuleca" she hid them all over the room rather than putting them in the basket.  I always speak mostly in Spanish but ask the kids what certain words mean in English periodically to make sure they are following along.  It took a few tried for the kids to figure out that huevos means eggs. 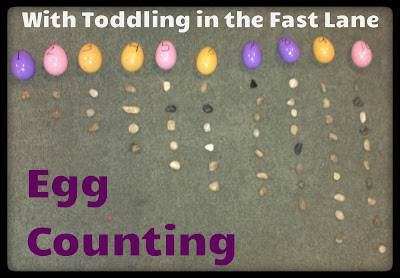 After the kids found all the huevos, we opened them up starting with on labeled "1".  It had one stone in it (Chiquita and I had practiced counting to get ready for this activity!).  The egg labeled "2" had two stones, and so on.  I made little rows of stones in front of each egg as we counted them from each egg, so they could see that the higher numbers had more stones and reinforce this math concept (I've been reading too many Montessori blogs, though I don't know tons about it myself, I hope this was "good"). Then each child helped put the stones back in the eggs, counting out loud with me as we filled the egg.  The kids crowded around me, eager to count!  I know that each of them wandered off for a second or two at different times but for the most part they were really engaged.  That was very exciting for me.

After this activity we danced around to "La Gallina Turuleca" from the cd Hola Yola, using the rock filled eggs as shakers. 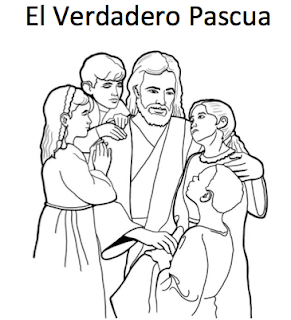 Then we settled down and read this mini-book I wrote, El Verdadero Pascua, that tells the Christian story of Easter and the great promise we have from Christ's resurrection.  Each child got a copy to color, and you can download one too!