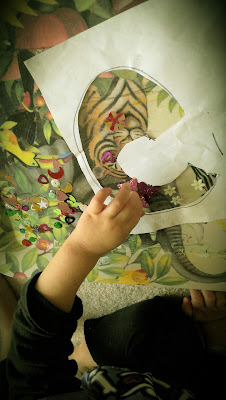 This week we're focusing on the letter C, which also happens to be the first letter of Chiquita's name.  We've done a lot of name recognition games lately so using her name for our first letter C activity just made sense.

I kept it really simple.  I just wrote a big block letter C on a page followed by the rest of her name in a little smaller print.  I cut out the letter C and put strips of packing tape on the back of the paper so face up the letter C was nice and sticky.

I gave the paper to Chiquita with a pile of spangles and let her decorate it.  She got into the spangles, separating out a family of butterflies and a family of flowers (she's really into grouping similar things right now).

For some reason she only wanted to decorate the lower half of the letter, meticulously unsticking any spangles that accidentally got on the top half.

See all the other alphabet crafts we've done!

Email ThisBlogThis!Share to TwitterShare to FacebookShare to Pinterest
Labels: Alphabet, Crafts to do Together, Name Recognition, Word Recognition