My hubbie decided Chiquitita should have a friend over for New Year's Eve.  Oh silly naive hubby.  Two two-year olds... all night... what was he thinking?
Honestly though, it went pretty well, considering. 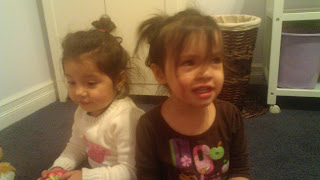 We watched New's Year's kids specials and did some crafts!  My favorite (and the girl's too) was Paper Plate Fireworks!  I even made some special treats - I tried to make a less-sugary version of these marshmellow snowmen from Reading Confetti by using bananas instead.  They were definitely less cute (no pics) but yummy.

Afterward we drove around watching fireworks.  The girls were a little scared at first but soon were asking for "mas!".  Chiquita was the first to fall asleep.  That meant hubbie got to stay up with her friend.  His idea :)