When I saw this post on "No Time for Flashcards" I knew that we would definitely do this activity.  I've done a photo game before to help get Chiquita ready to meet family and now that she's met all our immediate family I want her to remember them until the next visit.

I printed out two copies of my favorite pictures of Chiquita with our various family members from 2012.  I glued them to cards from a partial deck we had hanging around.  When they dried I trimmed the photo to the card size.  I wrote 2012 on the back (since I'm planning on making this a yearly tradition) and took them to get laminated. 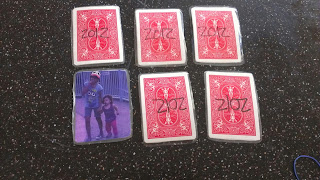 **Tip** If you're going to laminate a photo glued to a card or anything so thick, use the thicker laminate (like for id cards).  Lots of my cards didn't really seal so when I trimmed them I had to use packing tape to keep them from getting peeled apart.

We played two versions of this game, since Chiquita is only two we had to make it a little easier.  In the first version I would just pick 3 or 4 pairs of photos and place them face down, like the traditional game, just fewer cards.  The second version I'd use all the cards but place them face up and let her find the pairs.

Email ThisBlogThis!Share to TwitterShare to FacebookShare to Pinterest
Labels: Crafts to do Together, Family Photos, Matching Game, Recycled Crafts