I'm trying to do more activities to help Chiquita with her fine motor skills, like Stringing Snakes.  We've done necklaces out of cereal a few times, but Chiquita has always wanted to eat them instead of string them!  I can't seem to convince her yet that she'll get to eat them after she puts them on the necklace.

So I decided to make Salt Dough beads (same recipe as our Homemade Ornaments).  I just mixed up a quarter batch and divided it in three.  I made a little cup and put a few drops of food coloring in it and had Chiquita squish it up until it was mixed!  She liked that part a lot and it worked well until the 3rd color when I wasn't watching as well and she decided to wear it as a hat (oops).  We added some glitter to. 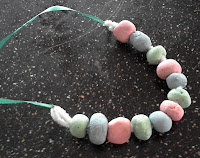 Then I made a bunch of little balls and Chiquita helped me poke them onto a skewer to make a hole.  Then we baked them for a few hours.

When we got to stringing the beads on I found that a pipe cleaner was still the easiest for Chiquita to manipulate so we used a pipe cleaner and made a color pattern (just like Millie, Chiquita said).  To make it long enough for a necklace I twisted each end into a hole and tied ribbon on.

Chiquita wore it for a while and then gave it to me "for Christmas".  Giving gifts for Christmas has been her favorite thing to do since the big day.  :)
Posted by yogamama

Email ThisBlogThis!Share to TwitterShare to FacebookShare to Pinterest
Labels: Crafts to do Together