My two year old currently has her own 4 food groups: chicken nuggets, celery, pringles and noodles.  She picks out any bits of things I try to add to noodles like peas or chunks of meat. It can be hard to get a well balanced meal into her tummy!  So I made some modifications to our boxed mac and cheese to include protein and veggies as well as carbs and dairy. 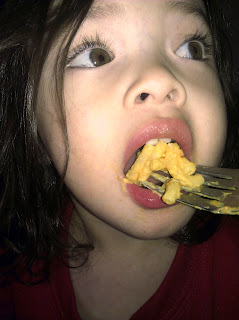 I start by cutting up a half a carrot and microwaving it with a half cup of water for a few minutes, until it's soft.  I put it in my plastic "baby bullet" style food blender cup so I can just blend it afterward, but you could dump it into a big blender or use a stick blender.  You want to blend it till it's pretty much liquid to disguise it!

At the same time (or afterward if both containers don't fit), in a separate bowl I put the mac with a cup of water in the microwave for 3-4 minutes.

When the macaroni is mostly cooked I drain out the water and add in the carrot "juice" and an egg.  I stir it up and put it back in the microwave to cook for another few minutes until it's completely done and the egg is cooked (you'll see little bits of egg whites even if you mixed it up really well).

Then I add 1/3 cup yogurt - plain or greek, don't accidentally use vanilla like I did one time *not good* and the cheese powder.

It's nice and creamy and my little one doesn't try to pick anything out.  It has 9 grams of protein protein if they eat 1/4 of the box (more than 4 chicken nuggets) and vitamin A!
Posted by yogamama

Email ThisBlogThis!Share to TwitterShare to FacebookShare to Pinterest
Labels: Recipes