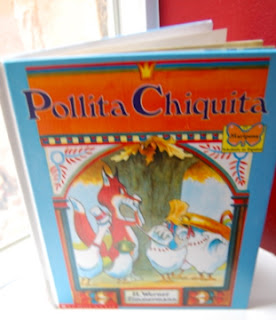 So this week's Spanish for Preschoolers was not as on-theme as some weeks have been.  I didn't have time to go to the library for a good Thanksgiving book and I had really been wanting to read the kids "Pollita Chiquita" (Chicken Little) by H. Werner Zimmermann (another discard stack find!)

I love this story and remember acting it out in elementary school.  As the animals were recruited I handed out buckets, pots and strainer for all the kids to wear!  It was a little distracting from paying attention to the story, but very fun!  So fun that we had trouble leaving the buckets when the story was done.  Another way I made the story interactive was as we named the animals, "Pollita Chiquita", "Gallo Rayo", "Pato Chato", "Ganso Manso" and "Pavo Bravo" we did the animal sound that went with.  The idea is that it will reinforce the word/idea connection for them.

We were going to sing "Venga a Ver mi Chacra" to reinforce the animal words they learned but *confession*  I forgot!  So.... 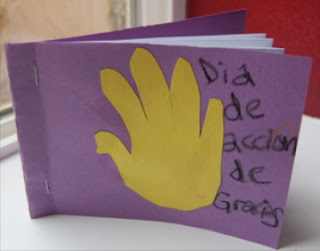 We made a Thanksgiving book for our craft!  I found this fun book about Thanksgiving in Spanish on Spanish Playground.  It's a simple story with some words replaced by pictures.  For kids learning to read it's a great starter book and for the younger ones it gives them a chance to help tell the story!  We cut the pages in half the long way and folded the half sheet in half so the story was on the outside (just like the mini books we've done before from www.dltk-kids.com, click here for their great tutorial on assembly).  The story didn't come with a cover so we took a half sheet of construction paper for the cover.  You tuck the pages in (in order!) with the open sides towards inside.  Then you staple on the outside of the cover along the spine.  That makes it so when you open it you get all two sided pages. 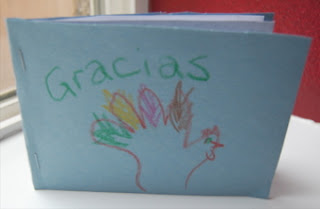 The name for Thanksgiving in Spanish is Dia de Accion de Gracias.  One of the mom's pointed out that the fact that the name in Spanish is so awkward is how you can tell this is a United States holiday, not Hispanic.  Thanksgiving really is American but so many other cultures celebrate the harvest with other festivals.  We'd love to hear how your family celebrates the harvest season!

Email ThisBlogThis!Share to TwitterShare to FacebookShare to Pinterest
Labels: Crafts to do Together, Songs, Spanish for Preschoolers, Thanksgiving