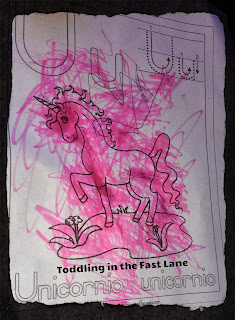 Chiquita loves unicorns!  Really, can you blame her?  I mean, magic horses, come on!  So obviously for letter U we had to do unicorns.

I got Chiquita started coloring this cute print out from primeraescuela.com while I prepped the craft.  She was very ademant that it be pink.  I never thought I would have a princess girl *sigh*.  I asked her if she wanted to trace the U, she did not, but she was glad to point it out to me.

I found an adorable U shaped unicorn craft on The Princess and the Tot for us to do.  I had a very hard time with the head and ended up making it a separate piece from the letter U (I can't tell if that's what they did or not). 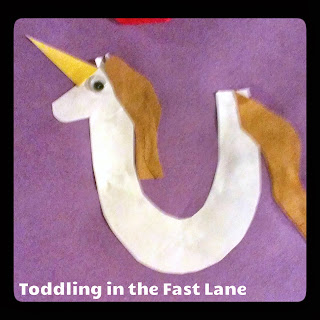 Chiquita was done coloring before I had the pieces of the unicornio done so she "drew" a little unicorn on pink post-it notes.  I love her imagination!

After Chiquita and I assembled her unicorn she still felt something was missing ("It needs wavy hair!  Oh, it has wavy hair.") so I suggested maybe her little unicorn drawing and the big unicorn could be friends.  She proceeded to introduce them and they had a short chat.
Posted by yogamama