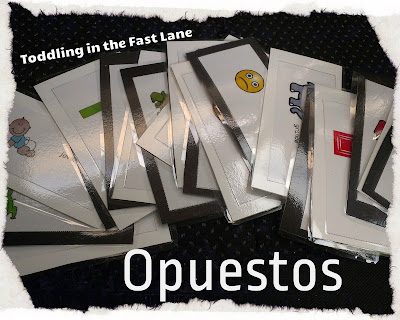 This has taken me forever to post, but for our last week of Spanish for Preschoolers, we focused on opposites.  I downloaded these opposite flash cards from Spanish Playground.

I started out with 10 pairs of words (I think there are 15 in set) and even that was too many for my class with limited vocabulary, so I only ended up going through 7.   I pasted the opposite pairs, one on black paper and one on white, to emphasis that the words were opposite and help in our games.

During class we used the cards in tons of different ways:
Between the 2nd and third set of flash card activities, we took a little break to read "Opuestos" by Sandra Boynton.  This was well translated (I've seen a few of her books that weren't well translated).  It was very simple, just opposite word pairs, but the illustrations were really funny.

I had an opposite craft planned, the kids were to trace and cut out their hands on white paper and the parents on black paper to show big and little.  Most everyone traced their hands, but all the running from the "Duck, duck, goose" game brought out the sillies and I don't think anyone finished it.

This was our last Spanish for Preschoolers class for the summer so the important part was that everyone left with happy smiling faces and a chorus of "Adios!"