Halloween versus Day of the Dead 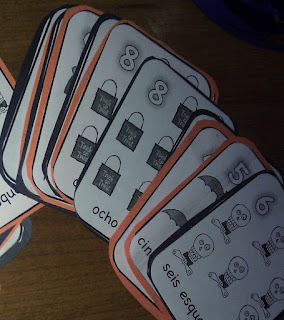 It's Halloween!  We've been doing fall activities so long that I can't believe it's here.  And I'm going to be sad to see it go.  We had a fun Spanish for Preschoolers this week though!

We started out playing a matching game that I got from a site I just found call TeachersPayTeachers.com.  The site has tons of educational resources to download, some for a price and some for free.  They are geared towards teachers but that includes home school and parent educators!

So I printed two copies of these Halloween Counting cards in Spanish and put one set on black construction paper and the other on orange (I think I'm going to laminate these!).  We played the game a few different ways.

The first time I kept one deck and dealt the other cards out to the kids.  I showed them one card from my deck and each of them had to check their cards to see if they had a match.  This is the same way we played our 4th of July Matching Game. 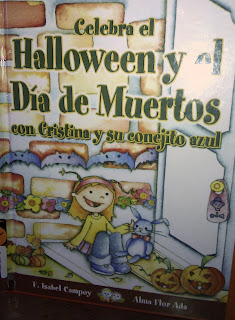 Later in the lesson we played a more traditional matching game with the cards all face down, like Old Maid.  The first round we only used one through four and the second round we did 5 through 10 so it was easier for these little ones.

Our book this week was "Celebra el Halloween y el Dia de Muertos" by F. Isabel Campoy and Alma Flor Ada.  The book is kind of in two sections.  The first section is about kids getting ready for Halloween at a friend's house who's family also celebrates Day of the Dead.  The kids ask some questions and you get a peek at what the holiday is about.  Then the second half is pictures of traditional Halloween and Day of the Dead celebrations and factual information about the history and traditions of both holidays as well as a few short comparisons to other holidays like Guy Fawkes Day and Diwali. 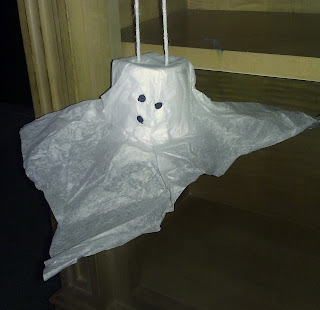 Then we made fun little ghosts!  They were super easy.  We took old small yogurt containers and punched two holes in the top, a screwdriver or even just a pen can make a hole easily.  Then we covered the sides of the container with a strip of white paper (so the colored plastic doesn't show) and glued on a piece of tissue paper.  We added two punch holes of black construction paper for eyes and some kids added one more for a little mouth.  I took a yarn needle and threaded the yarn through and they were ready to hang!  We spent lots of time letting them fly around the room going "Whoooooo".  That was definitely Chiquita's favorite part!

Email ThisBlogThis!Share to TwitterShare to FacebookShare to Pinterest
Labels: Crafts to do Together, Day of the Dead, Halloween, Recycled Crafts, Spanish for Preschoolers