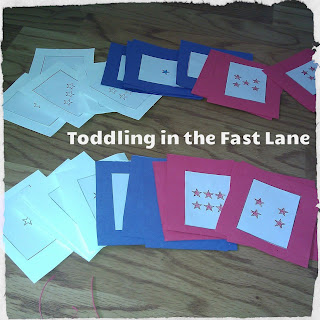 I wanted to figure out more games for Chiquita to play during the long plane rides to and from Europe (more to come on Europe soon).  Portability was top priority so little cards made a great option.  I came up with a new way to play the 4th of July Matching Game we used in Spanish for Preschoolers last summer.  I call it "More or Less".

To play simply take the first two cards from the deck and place them side by side.  Ask your toddler which has more stars.  If they need help you can count the number of stars on each card together.  Whichever is more goes in the "more" pile.

Either play until the cards are gone (if you have a less pile) or you only have aces left in the deck.

Chiquita had a lot of fun playing this on the plane.  I found it was harder for her when both cards had a lot of stars or very few stars, she would want to call both of them "more" or "less" rather than compare them to each other.
Posted by yogamama